Style Babe: From Roadkill to Rude to Rad

As I mentioned, I’m in New York this week. Today I woke up with an intense craving to stand next to a New York City street cart and inhale the simple smells of coffee and donuts. I was in a bad place, and I needed to  come back to earth, and exposing yourself to the proletariat can really help ground you when you feel that you’ve lost your way in the world. Plus, I had just watched The Outsiders and was thinking a lot about Patrick Swayze. Let’s just say that since he said “byeeee,” I’ve felt disconnected and have had severe trust issues.

What I didn’t factor into my plan to reconnect to the 99%, was that Manhattan during this time of year is a fucking disgusting wasteland of wet tourists in wet UGGs with their hair in wet messy buns (not clear on why so many people feel the need to flock to the grayest city in the world for the holidays). I was getting jostled around, which is the worst when you’re hangry, and it was raining so hard that my periwinkle Birkin was turning into a navy Birkin. I was so scared and alone, and wondering how in the name of fuck I’d ended up in NYC so scared and alone. I found a dry spot beneath a scaffold in the Meatpacking District, folded Linette (my periwinkle Birkin) under my jacket, laid down on the ground and willed my heart to stop. I was a goner. Ready to die.

Then, as if baby Jesus was watching from his bugaboo in the sky, I was saved. I felt a swift kick to my tits, and when I looked up to see who my mugger was, I was met with the glowing faces of two beautiful, brown-haired sisters–both very thin. They turned out to be Danielle and Jodie, designers of the jewelry line, DANNIJO. They took my hand, helped me off the ground and invited me up to their showroom which, fortunately, I happened to be blocking the door to. Once we were inside, the three of us gabbed about crystals, ate crystals then threw them up, and tried on tons of jewelry. BryanBoy even stopped in at one point to say hi. He’s chic, or whatever. 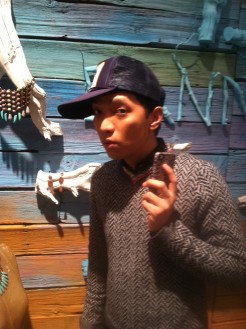 I’m now obsessed with DANNIJO’s spring line, inspired by Rothko and some other shit that I forget now but it involves colors. Very LA. I ordered the entire collection. By the end of the afternoon, we were having the best time, and I wasn’t even dead like I thought I’d be. Thanks girls! 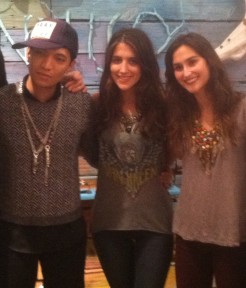 Ask Babe: Not So Hot Pockets
Ask Babe: Removing The Maxi Fad
Ask Babe: Karlie
This entry was posted in Accessories, I Am Fashion, Jewelry, Shopping. Bookmark the permalink.
BUY A BOOK   |  NEWSLETTER