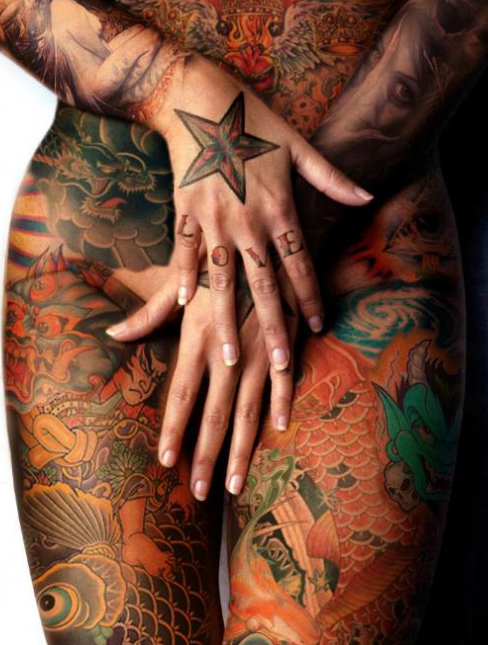 Are tattoos ever acceptable? Or do they forever mark you as white trash?

Tattoos are one of the greatest ways to express your personal journey to the world. I’ve personally had about 17 tattoos, and about 16 tattoos removed. My mantra is if I NEED to commemorate a moment in time with some ink, I go for it, and ask questions later. I’ve had it all: band names, boyfriend’s names, boyfriend’s dad’s names, my name, mantras, chants, Japanese characters, Chinese characters, Star Wars characters. I just don’t stick with any one thing for very long, because I’m a Gemini and my tastes change rapidly. So I’d say, tattoos are definitely acceptable, but make sure you find a great tattoo artist and an even better tattoo removal artist.

The following types of people can pull off “ink”:

But the truth is, if you’re using the term “White Trash,” you’re at a higher risk of becoming “White Trash” yourself. So let’s just go ahead and not get a tattoo.

Ask Babe: Spit Or Swallow
Ask Babe: My Second Child
Babe on Film: Behind the Candelabra
This entry was posted in Ask Babe, Beauty, Lifestyle, Trends. Bookmark the permalink.
BUY A BOOK   |  NEWSLETTER