I guess The Hunger Games movie came out today because this morning on my way home from watching the sunrise in Malibu with my Maid/BFF I saw a terribly large crowd of gleeks and their dads waiting outside of a movie theater on Wilshire. I asked Mabinty if it was Occupy Wall Street and she said no, it was for The Hunger Games.

Of course, I’ve read the book and loves loves loves, but I want to take a moment to honor one of my favesiest movies that totally inspired/is The Hunger Games. You know I love a sci-fi moment but this is one of the best. This lil’ gem of a film goes by the name of Battle Royale, it came out in 2000 and if you’ve never seen it then you’re late and should be ashamed. Here’s the gist:

Basically this kid attacks his teacher with a knife and the teacher is fat and he resigns because he’s mad about being stabbed by one his students. A year later, the kids from the school are on a field trip that turns out to be a trap. They’re all gassed on the bus and when they wake up they’re told by their old, scorned teacher (who just shows up out of nowhere) that they will be players in a televised battle royale. The game only has one winner: whoever lives. In addition, they’re given no chic outerwear like the brats in The Hunger Games, they have to do all this in their school uniforms. Luckily, the uniforms are CHIC TO DEATH. Then they all kill each other with axes, grenades, guns, etc. It’s major. 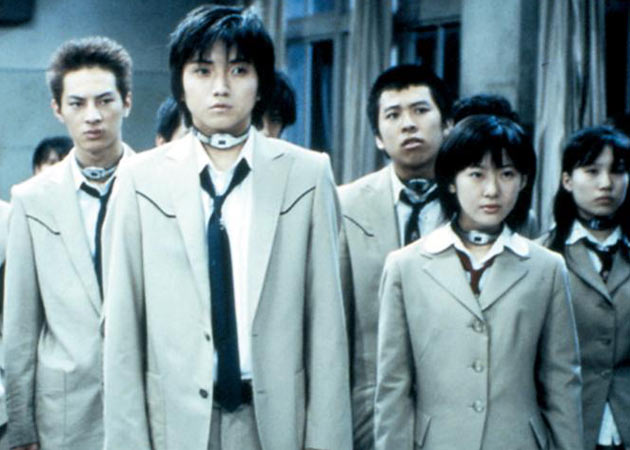 I don’t want to spoil the ending so you’re just going to have to see it. Do not smoke pot before this one, one or two drinks may even be too much to handle. I like to watch it in the safety of own my home theater with a pillow for screaming into. Also, I style myself like a japanese school boy (blazer, oxford, tie, shorts all BOY. by Band Of Outsiders or Men’s Prada).

So, before you see that other movie about little girls with weapons, get smart to this perverted, dark, depressing, Japanese gorefest. You’ll probably love it, psycho.

How To Speak Fluent Pastel
Babe On Film: VFILES
Reason #381 To Never Leave Your House: Farfetch
This entry was posted in I Am Film, Movies, Trends. Bookmark the permalink.
BUY A BOOK   |  NEWSLETTER