← How many pets is too many pets? GALLERY 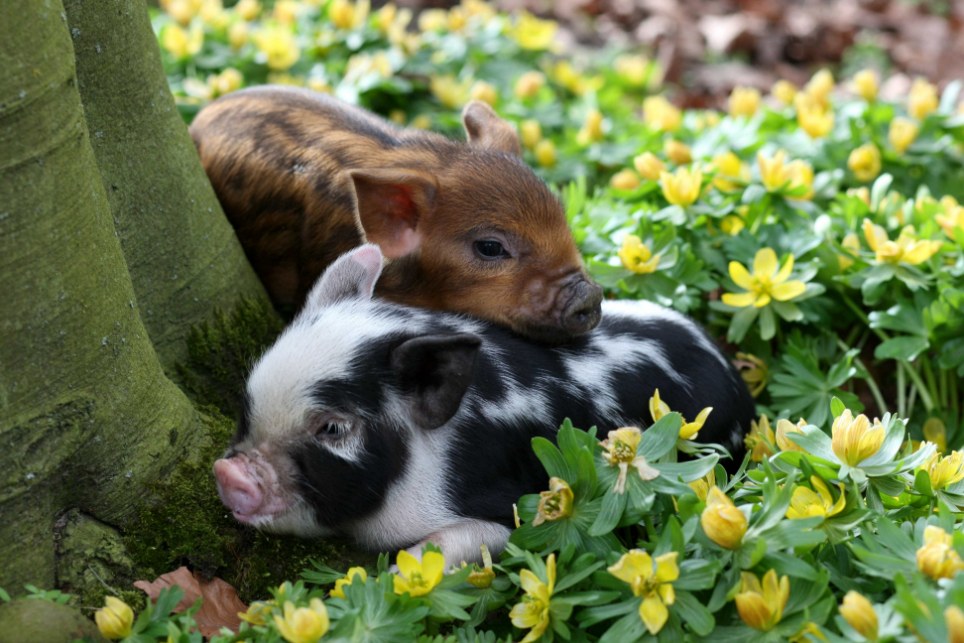 These cute baby micro pigs took their first steps outside as Britain celebrates the first day of Spring today (Sun).

The tiny three-week-old pigs, which are the size of tea cups, enjoyed the Spring sunshine as they bounded around in the bright yellow blooms.

The adorable piggies, which grow to just 14 inches tall, are among a litter of 10 who are remarkably all different colours.

The little brothers and sisters made the most of their first outing as they played rough and tumble and buried themselves amongst the spring bulbs.

“It is the first time they have been outside as the weather has been too cold until now and they absolutely loved it,” said Jane Croft, who breeds micro pigs at Little Pig Farm in Christchurch, Cambs.

“The litter is quite unusual as they are all different combinations of colours and patterns. I was quite shocked at first.

“Their mum is black and their dad is a second generation Wild Boar Cross so I was expecting some stripes, but the ones with spots were a complete surprise.”

Micro pigs are the latest pet craze in Britain and have become so popular they are almost impossible to get hold of.

They are much smaller than a standard farm pig and weigh just 9oz when they are born.

At two years old they are fully grown and weigh in around 40-65 pounds and are around knee height at 12-16 inches tall.

The pigs, which cost up to £700 each, can live for up to 18 years, but make popular pets as they are low maintenance, quiet and surprisingly clean.

“I’ve got a long waiting list for my micro pigs, they have become incredibly popular pets,” added Jane, 42.