Babe on Film: About Last Night… 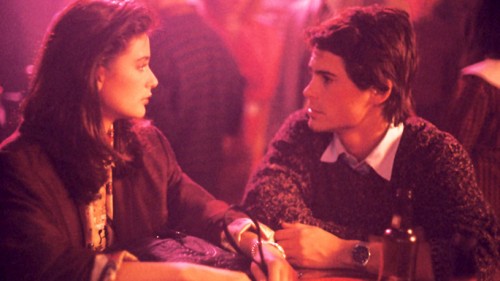 “About Last Night” is one of my all-time favorite 80’s movies. Rob Lowe before he started to look like Michael Jackson, Demi before Ashton turned her into a bird skeleton, and some other people who weren’t as pretty so I didn’t pay attention to them. Anyway, the film is about two sexy young movie stars who meet in a park and have a one-night stand that turns into a bunch of night stands and then turns into true love.

I love this concept. Not just because it’s how Robert and I met (read about it, it’s tragic, don’t ever mention it to me again), but because the chances of accidentally spilling coffee on every person you want to fuck is pretty much zero unless you’re a complete walking disaster. Also, since Demi and Rob get together so early in the movie, we totally get what crazy chemistry they have.

Their respective best friends try to drive them apart, which is super stupid and annoying so I’ll warn you right now just ignore them. Anyway, a bunch of other stuff happens that I usually fall asleep during and then they get back together on St. Patrick’s Day.

I bring this up because I guess there’s going to be a remake? It’s impossible, sorry. Lightning only strikes twice – on this movie and again on St. Elmo’s Fire, where Rob and Demi were totally hot for each other even though the movie didn’t realize it. If I see some cheap knockoff of this movie pretending Justin Timberlake and Rachel McAdams are sufficiently hot for this movie I will scream.

By the way, when you watch this make sure to smoke a shitload of pot beforehand because the ugly 80’s clothes are literally insane and would give you anxiety otherwise.