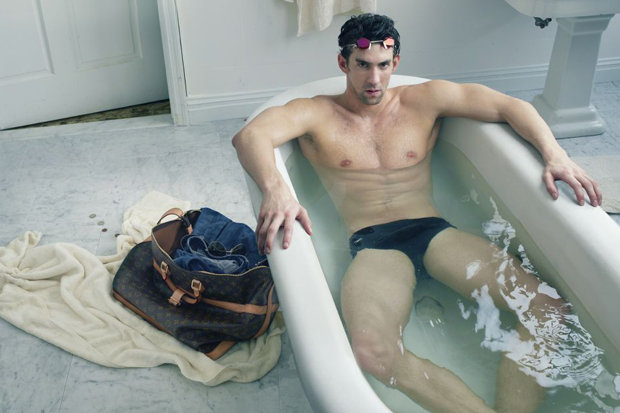 I’ve been thinking about this LV/Michael Phelps mess all week and I couldn’t even deal. I pushed it to the back of my mind and locked it in a little box that I thought would never be opened again. But then I had this dream last night in which I was having a Ménage à trois with Ryan Lochte and Jordyn Wieber when all of a sudden, Annie Leibovitz walks and starts taking pictures of us. Chic, right? But then it turned into a nightmare because I realized that Annie wasn’t actually taking pictures of us, but rather she was shooting Michael in that bathtub, wearing speedos.

I was horrified. Then I realized that Ryan Lochte was actually Ryan Seacrest (sick) and Jordyn Wieber was actually Jordin Sparks (too tall). Anyway, my point is that we should all be praying for the advertising executive who thought it would be a good idea to pair Louis Vuitton, the world’s most recognizable prestige brand, and Michael Phelps, the world’s most likely person to be on the cover of a Wheaties box. It’s not chic. It’s not a good match. And that photo? They could have made it a lot less painful if they hadn’t chosen that one. Let us pray.