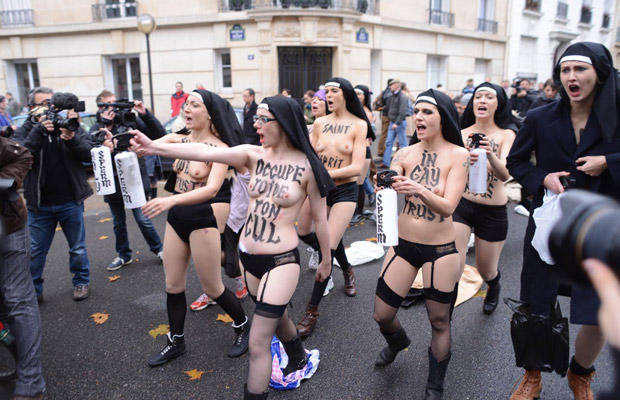 Hello, Psychos. Today we are praying for Femen, a topless pussy-gang of feminists who protested in le support of le marriage de gays this weekend in Paris. They accessorize their tits-out looks with body paint and nun’s caps. It’s so next level unchic that it’s just regular unchic, which is actually super chic this Fall, especially in Paris. We pray for their exposed, chilly little nipples because their protest ended in violence which is so incredibly pedestrian that it hurts, literally. They were spraying a Catholic group (who were going on about how much they hate gay marriage) with white powder and chanting “In gay we trust” and I guess the Catholics were just not that into it. So people started getting touched. Can we all agree that strangers do NOT need to be touching each other, much less punching? Femen deserves better than this. Stop hurting Femen. Pray for Femen. Should I name my next dog Femen?