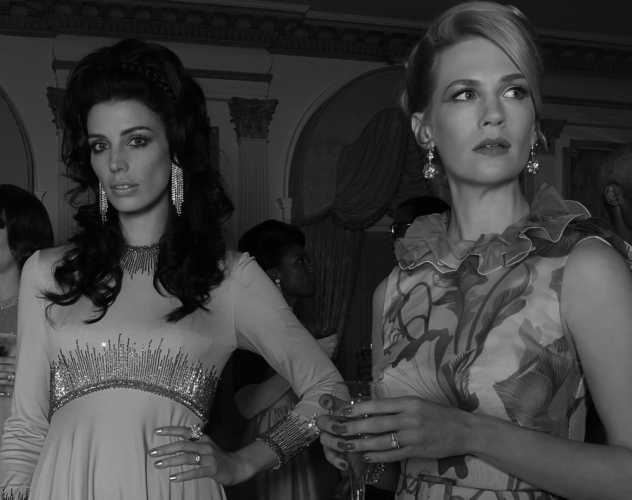 I need to talk about “Mad Men.”  It’s obvious that Joan is a complete Babe, while Peggy tends more towards Babette.  And Roger Sterling is forever a Babe, while Pete Campbell is a Babette (gender is a social construct; being a Babe goes beyond that).  But I am having a problem determining the chicness of the two Mrs. Drapers.

Betty Draper used to be a model (chic), but then became a member of Weight Watchers (not).   She also has no ability for dirty talk, which is a real shame if you’re going to be both married and fat.   And that’s not even taking into consideration the fact that she was once Mrs. Draper (chiiiiic) but is now Mrs. Henry Francis (who?).

On the other hand, we have Meghan.  She speaks French (chic), but because she’s from Canada (not).   She seduced Don while she was still his secretary (kind of maybe chic?) but now is beng cheated on with the girl from “Freaks and Geeks” (who herself has never looked older or better).

My final judgement?   I have no idea how it was possible to sustain Babe-ness in the late 60’s.  What a fucked up decade.

So, The Met Gala Happened...
Frigid Bitch
David The Intern (Part Six: Uniform?)
This entry was posted in Babe, I Am Culture, TV Shows. Bookmark the permalink.
BUY A BOOK   |  NEWSLETTER