An Open Letter To Carrie Bradshaw 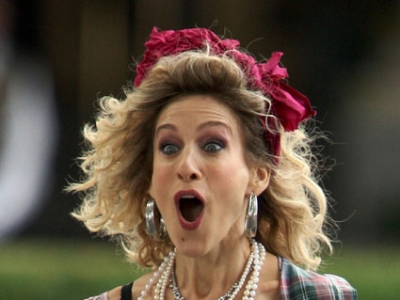 You are saving the world one pubic lice at a time, so thanks, I guess. And sorry, everyone, that you just had to read the word ‘lice.’ Twice.

I never really liked you, Carrie. But according to the British Association of Dermatologists, your acknowledgement of the importance of waxing on an episode of Sex and the City encouraged so much hair removal that it rid the world of pubic lice forever (except whatever’s left on Anna Nicole Smith’s body).

If your hair style is any indication, you made a very good decision in trying to make your vagina look a little less 80’s passport photo and a little more 21st century civilized.  And while I don’t recommend bald vaginas for everyone, I do admire your ability to publicly influence the dialogue (even though your waiting until you were 40 to get your first brazilian seriously makes me question what other areas of your life have been neglected).

Sooooooo congratulations. You unintentionally influenced vaginal upkeep all across this sick, licey world, which is kind of amazing considering you’ve been off air for like ten years.  You also taught us that whether you prefer to wax, weave, shave, sculpt, bleach, straighten, braid, brazilian, or go all natural and voluminize, it’s important to make responsible, sanitary, and cutting edge choices that best suit you and your garden (pussy).

Elizabeth Banks is Benjamin Buttoning
Ask Babe: Getting Deep
If Only Rehab Had Been This Chic...
This entry was posted in Actresses, Beauty, Body, Book, Celebs, Hair, I Am Culture, I Am Health, Open Letter, Plastic Surgery. Bookmark the permalink.
BUY A BOOK   |  NEWSLETTER