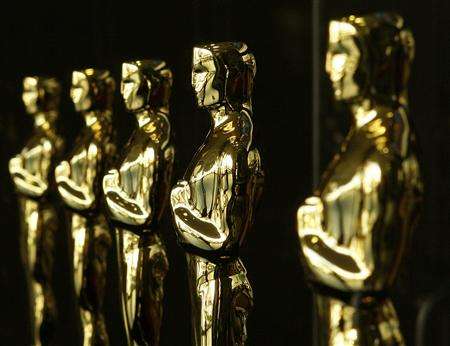 The time has come when I get my annual period, and Awards Season kicks off with the Meaningless Awards, a.k.a. the People’s Choice Awards. I don’t watch these, because A) if Ryan Gosling isn’t in attendance I don’t give a shit, and B) I have a life, and right now that life revolves around planning my Oscar viewing party. I know, I know, you’re probably asking yourself why I’m not going to the Oscars. Here’s the deal: I only go to the Oscars if Gwyneth is nominated (moral support) and this year, despite hiring a team of interns to make Contagion-themed gift baskets to send to every Academy member, I’m sorry to say it’s not looking good. Sorry G! You win some, you lose some.

Anyhow, whenever I host an Oscar viewing party, the dress code is always “favorite red carpet moments” from Oscars past. It takes a lot of pulled strings and promised handjobs (promised not given–I would never) but I always manage to get my hands on a killer outfit. Here are some of my fave looks that I’ve brought back from the dead over the years: 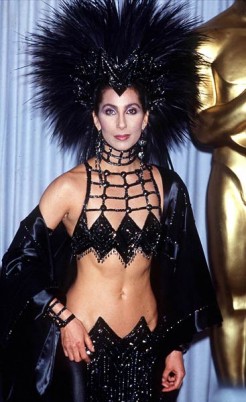 When I was going through a major mushrooms phase, I got the most intense spray tan of my life and wore this outfit (sans cape) for a night. That headpiece may look like it’s light as a feather, but TRUST, it’s at least 35 pounds. I had to wear a neck brace for two weeks after that party (completely worth it). Also I don’t know what kind of voodoo magic Cher pulled to get that skirt to stay up, because it fell off me halfway through the evening. It wasn’t until I was looking at pics of myself the next day that I realized I was bottomless for most of the night. Oh well.Audrey Hepburn – Hubert de Givenchy 1954 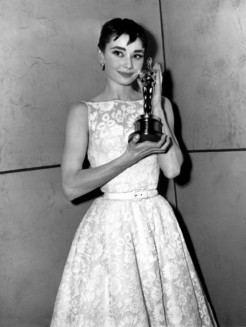 In middle school my friends and I had a contest to see who could get mono first. The winner would get to wear Audrey’s dress to my Oscar party. Actually, getting mono was the only way any of us would have been able to fit into this frock anyways, because Audrey was teeeeeny. Like, I’ve always prided myself on being slim, but she had the body of a 9 year old–so jealous. Obviously, I won the contest–getting mono is my favorite sport, second to passing out when caught in a lie. 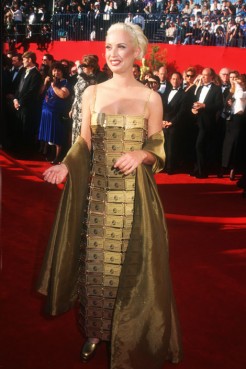 After I lost this dress in a bidding war at a charity auction (Fuck you, Elton) I decided to make my dad order me 250 custom imprinted credit cards from American Express so I could make my own. Turns out that was the right decision, because the original one featured Lizzy’s name on every card, and everyone knows that, unless they belong to your blood relative, carrying around someone else’s credit cards is not chic. 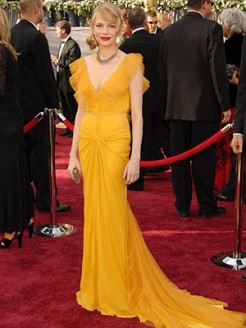 It was an Oscar party of one the year I wore this dress. Heath Ledger was nominated for The Dark Knight and I was in this Vera Wang gown, laying in my bed, crying and eating vegan cupcakes. 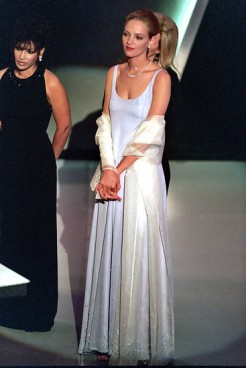 2012 is all about streamlining and getting back to basics. I’m so sick of feeling weighed down by possessions and things, you know? So for this year’s Oscar party I’m trying to go minimal and chic. I’m thinking Uma’s Prada gown will be perfect. I mean, look how perfectly bored this dress makes her look! Plus it will make my best friend Gen so fucking jealous. She thinks she’s going to one-up me by wearing Cate Blanchett’s 1999 John Galliano and it’s just not going to happen. I win!