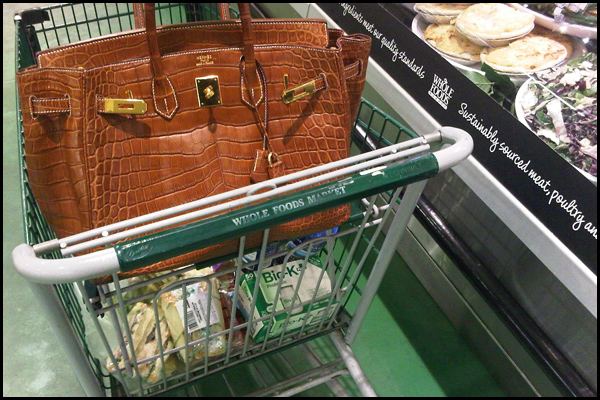 Taking your Birkin to a place it should never go: the grocery store.

Hermès, we have a problem: The Birkin used to be a mystical creature. Much like unicorns or polar bears, they were limited in population, and spotting one meant that you were in the presence of something truly magical and unique. Now everyone and their fucking dog’s dog carries one, and I am having a hard time with this. Isn’t there a 10 year-wait list, or a pre-requisite checklist of some sort? Back in the olden days, you used to have to have won an Academy Award, fucked someone who’s won an Academy Award, or be an Olsen twin, Jane Birkin, or royalty in order to carry a Birkin. Nowadays, it seems like all you have to do is go to some street corner and visit a Birkin truck where I guess they’re giving them out to anyone dressed in white skinny jeans! I don’t want to have to have my Birkin collection cryogenically frozen until 2069 when they’ll be chic again, but I will do it if need be. Please Hermès Gods, put a stop to this! xo, Babe.

Ask Babe: Heiress Bueller
You're A Babe: P'Trique
Campaigns Of The Corn
This entry was posted in Accessories, Handbags, I Am Fashion. Bookmark the permalink.
BUY A BOOK   |  NEWSLETTER