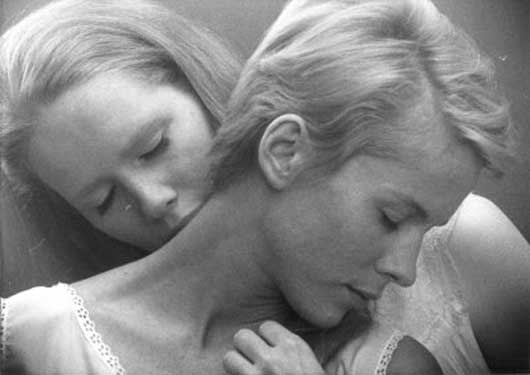 I love this movie. It’s Black Swan before Black Swan had even thought about Black Swanning. It’s about a sweet nurse named Alma who had an abortion once and can’t stop talking about it, and her charge, the eccentric actress Elisabet, who has stopped speaking entirely. Alma has to spend so many long days and nights with Elisabet that she starts talking about herself and can’t stop, even when she suspects that Elisabet might be trying to siphon away her identity. It’s a good lesson about codependency – it always ends with an unrequited gay crush going too far and accusations about someone’s parenting skills.

The whole thing is aided by the spectacularly incomprehensible direction of certified cinematic genius Ingmar Bergman. Why else would the movie start with a five minute surrealist montage? Who else could pull off repeating the entire climactic monologue just so you can see another character’s face? Even better, there’s absolutely no resolution, so I never feel any pressure to finish watching it.

Babe On Film: Get To Know Leo
Babe on Film: Breaking Dawn vs. Anna Karenina
Getting Clear On The 1950s
This entry was posted in Dreams, I Am Film, Movies. Bookmark the permalink.
BUY A BOOK   |  NEWSLETTER