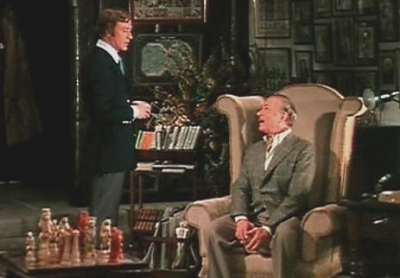 If, like me, you’re feeling restless and all the celebrity wedding and celebrity engagements of late are giving you anxiety, why not sit down and watch “Sleuth.” I normally write about high school movies, or movies about bitches, or thinspirational movies, or really heavy documentaries for when you’ve smoked a lot of pot. But “Sleuth” is a little different. First of all, it’s based on a play from 1970 and was turned into a movie in 1972, so there’s a lot of talking.  But, for once, it’s worth it to pay attention – it’s a great story about a crazy old British accent (Laurence Olivier) who tries to convince a slightly less crazy British accent (Michael Caine) that they should pull off a fake perfect crime. It’s a tense, exciting movie that’s sure to distract you from counting how many girlfriends Ryan Gosling has had that aren’t you.

Babe On Film: Farewell, My Queen
Babe On Film: Jiro Dreams Of Sushi
Babe On Film: Kristen's Balenciaga Liveblog
This entry was posted in I Am Film. Bookmark the permalink.
BUY A BOOK   |  NEWSLETTER