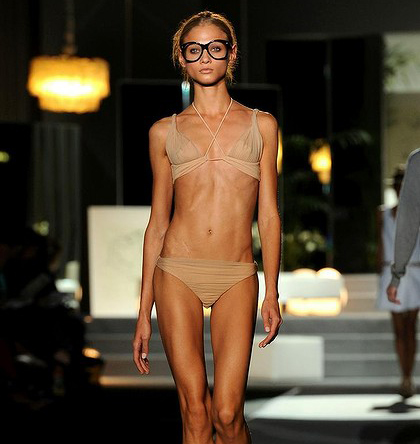 About once a month I’ll get “serious” about losing weight, go to the nearest juice place, get a smoothie that’s called “Green Machine” (which definitely has like 800 calories), and then give up a week later after having tortured myself to lose a pound. To clarify, it’s not that I’m “fat,” it’s just that I’ve been in this really weird medium space for the past few years where people don’t necessarily notice if I lose a few pounds, and “getting in shape” would require a overhaul of my diet and lifestyle. Basically, I’m not skinny or fat. According to Babe I’m “physically nondescript.”

Well, a few months ago I actually committed to getting in shape for summer and I’ve finally started to get something that resembles my old jaw line back. I’m definitely not there yet but I’m making real progress, which is a good first step.

Aside from constantly asking me if my weight loss is due to a life threatening illness, Babe supports what she calls my “journey toward a journey.”  Then on Monday, she said that she would be taking a more active role in my weight loss.

And so this week was all about what Babe called “interrogating my fat boy tendencies.” On Tuesday she went to lunch at the Peninsula, and brought me back French Onion Soup, a Bacon Cheeseburger with Truffle Fries, and a Chocolate Hazelnut Milkshake. Then she starred at me silently for ten minutes until I gave up and threw everything away. On Wednesday she instructed me to go to the nearest Starbucks during something called “Frappuccino Happy Hour,” order ten Venti Double Chocolaty Chips, and sit at a table alone with them for 30 minutes. She also sent me multiple texts of pregnant Kim Kardashian that simply read, “you.”

Sometimes, I’m really glad I have Babe in my life.

New Year, New Babe: Productive Resolutions
NBGay
Dear Oscar Attendees...
This entry was posted in I Am Culture, I Am Love, Lifestyle. Bookmark the permalink.
BUY A BOOK   |  NEWSLETTER